A week ago i had the idea to make an about page. It seemed to me a perfect idea. My website is a bit confusing to new visitors. Even though i use a simple system, work that usually takes about half a day to make and simply post it as it comes. That's it. But it's a very different website from what people are used to, nowadays. So i started writing.

Then slowly it dawned on me. This about page, this page you are reading right now, this page will be the last page of presents. That scared me. And i stopped writing. I knew I had to think about this for a bit. I could be wrong. Maybe this was just a random thought, which had no relation to reality.

But the thought kept coming back. And I started to realise it was the right thing for me to do. I had ideas for presents, yes. I enjoyed coming back to these pages a few months back. No regrets there. But I also knew my heart wasn't in it anymore. It is in the flash presents i made so many years ago. And Flash is a program of the past, i know. I did enjoy playing around with the canvas tag and javascript for a bit. But it didn't feel the same anymore.

I write this about page on monday, January 26 2015. Tomorrow I will post it. I do not know what i will do do after this. I need to say goodbye first.

But, there are a few works i do want to talk about, so I will do that on this page. I do not think i ever truely lied on these pages, but it's more a case of not saying everything there is to say. And a couple of presents (or pre-presents!) deserve more.

I linked these drawing early on, July 13 1997. I only told the date i made these drawings, and i had given each drawing a title.

On February 2, 2005 i talked a bit more about these drawings. I also had new photos where the drawings are shown in the box they belong in. I talked about their story, or rather my story.

Finally on November 23, 2014 I showed the last piece. It's not a drawing, but text. You can see the box behind it. It's the final verse of the song A little Knowledge by Scritti Politti.

I tried to give these drawings to friends, twice. The first time to a close friend, who is in the very first drawing. It's me on the left, her on the right. We lived only a few houses apart from each other, close to Marconiplein in Rotterdam, where three big black and white office flats are standing. Only after a few months i got them back. I do think that me looking at them a lot while they were with her had something to do with it. We sort of broke off our friendship shortly after that. The second time was in the 90s. I gave them to another close friend. She also gave them back to me, after a few months.

After these two times i kept the drawings for myself. They were not a huge part of my life. The memory of me making them slowly faded away. The past years they were standing in a cupboard. I never thought about them.

A few months ago, while i was working at a company in the center of the country, i fell in love, briefly. It was weird. I didn't know the guy, i had never spoken a word to him. But i felt like i was hit by a sledge hammer. It lasted a week, then i saw the wedding band on his hand and decided i didn't want to go through with it. But i did feel very awake. I remember sitting in the train at half past seven, listening to music and watching all the people sitting there reading, or listening to music themselves or dozing off. I took some pictures and posted them to my Flickr page. And a few days after this i was making presents again. And a week or two after that i left the job.

In that busy time, i took these drawings out of the cupboard and i set them on the chimney in my frontroom. I watched them a few times. It was like they were new to me. I also made some appointments with old friends, who I hadn't seen or talked to for years. I took these drawings to one meeting with one of my closest friends and showed them to him. He had never seen them before.

I'm still not sure what these drawings mean. They are made by someone young, only 21 years old. The first drawing is clear to me, and based on real things happening in this world at the time i made it. The second one isn't hard either, It's a person freeing itself. The third one, my favourite, is a child flying on mother. With a flower on it's head. The fourth one is still not clear to me. There is a tower in the background, with seven circles over it's top. It could be a town. In front is a large animal filling almost the entire field. It could be walking away. I always felt it was angry. Like it was being chased away from that town in the background. The fifth one is a battle between a male and a female. The final drawing is a face, a broken heart with something yellowish flowing outwards towards a needle like structure. Between that structure and the face is some music like communication. The final page is not a drawing, but a verse. I'm not sure when i wrote this verse, but it must have been within days, or could even be the same evening i made the drawings.

These drawings are the most beautiful work i made in my life.

As i wrote on July 1st 1999, Presents started out as a complete surprise. I was invited to join the Kunstvlaai, an independant art exhibit in Amsterdam. I had made a ‘The best of Ellen’, but I wasn’t happy with it.

I'm not sure when i got the idea of doing a day of ‘selfies’. It could have been while I was sitting in the train back home on thursday. Anyway, on friday morning i did start! The first photo was while i was still sleeping. With a smile on my face. Of course I was very much awake, I made all the photo’s that day myself.

The day that followed was magical.

The entire day i was busy copying photos from my camera, resizing them, maybe make some colour corrections and uploading them to the website. I don't know if anyone in Amsterdam ever watched this going on, but i didn't care. I was busy making photos. Dressing up. Changing my hairstyle, from loose, to a ponytail to two braids to loose again with two hairpins. Going into town. Buying a magazine, a t-shirt, some hairpins. I painted my nails! One of my favourite parts of the entire website. I don't remember how i did this, if i uploaded each picture seperately, or some together. Going to the library. Going to the shop. Watching tv. Dancing. Lying on the couch. Watching some show about a porn actress saying: "and if i don't go out, like this evening, i will remove my make up". Silent witness. And finally me, sitting behind the computer, with my own portrait on its screen. 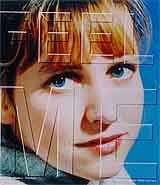 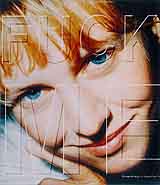 On the homepage i call Homebase a failure.

After retrospective i worked on homebase for about a year. One of many mistakes, i tried to make a labyrinth of images and links and little games, where you randomy wander through. It is confused and frankly, quite annoying. Still, there are many pages in there i'm very fond of. Best place to start really is the index page.

In Homebase there are some old works from artschool. The three pictures of me with the text Feel me, Free me, Fuck me over them is my exam work, made in 1991. There are small javascript games in there, a couple of mazes, gif animations, hearts, two people kissing, me standing on top of the world, decision trees, Whitney, the Girl with the Pearl (by Vermeer), found drawings, a diary page, drawings i had made myself. And this is only half of it.

I love all of the pages in Homebase. It's only the links between them which makes it hard for me to look at it. That is the reason i like presents so much more, it's a lineair system, simply adding stuff at the end of the line.

I tried. I honestly did try to make art work for me. For a few years after i graduated from artschool. I had some assignments. I organized this exhibit Sexposition with a friend, which wasn't that bad looking back on it. But it just didn't feel right. So when i found out i could work at the printer, where i did some summer's work, i took the chance. When i was worn out after 5 years, i quit without anything to fall back on. So that when one of our clients asked me to work for them, i said yes. When I was asked to come to London and work there, i said yes. And came back because the company was going bust and the new work i had found was finished too. And i missed my friends. And London is quite big and strange when you're alone. And then after 10 years your job gets sold, and you go to this other firm. And when that doesn't work, you leave. And you start for yourself. And you end up here.

And somewhere in there i had forgotten about presents, about my work, my real work. For the last eight years i had not worked on it. It was stuck in the back of my mind, just out of sight.

I do know i have said all i wanted to say. Repeatedly. I remember thinking that my website is like this place where i only wave hi to people passing along. And yes, that's basically what it is. But also much more, geez Ellen, just be honest. ggrrrrrr... stupid girl!

So, i do quit here. And now. I do hope to find something else to work on, soon. But for now, i gotta say goodbye.